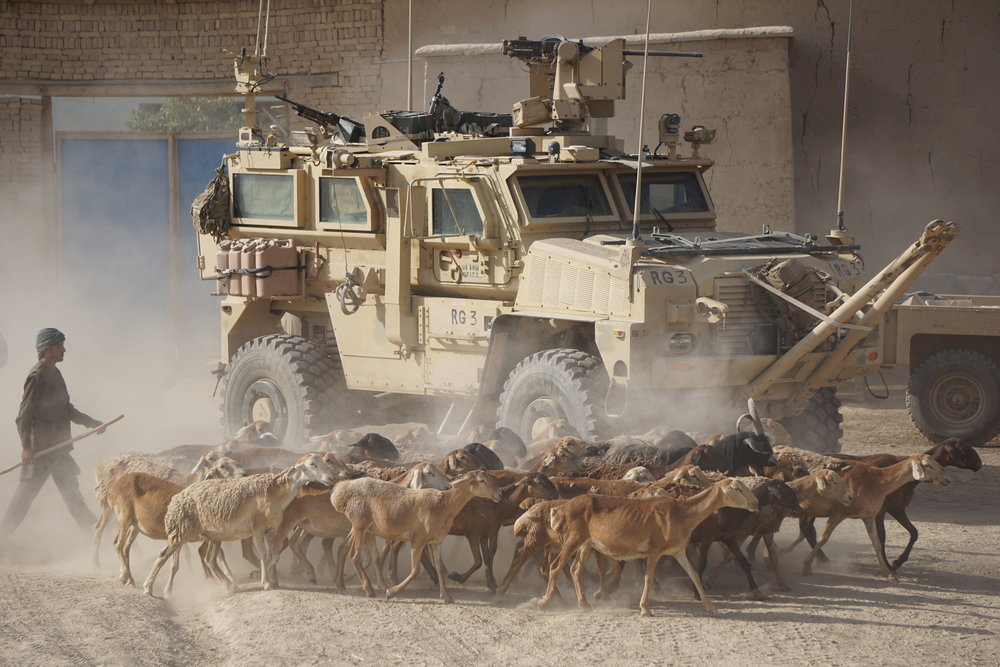 This blog post is written by Rory O’Connor, a Johns Hopkins SAIS student pursuing a Masters of International Public Policy with a focus in Strategic Studies. A Maryland native, he earned his undergraduate degree in Geopolitics from the United States Military Academy and is currently an officer in the U.S. Army. Rory has deployed to three different areas of responsibility over the last ten years and looks forward to applying the experience and knowledge of this program to his career field. His photo, “When Worlds Collide,” won first place in the 2018 SAIS Perspectives photo contest.

Last year I watched a documentary about a World War II photographer named Tony Vaccaro. Going into the war, he was already a photographer, but he enlisted as an infantryman with his own camera because the ones that war photographers carried at the time were not portable or light. What he was able to capture with his simple camera was the side of war that people don’t always get to see: the front line, both good and bad, life and death. He was granted that access because he was a part of it. Mr. Vaccaro had a way of capturing the intricacies of an experience and conveying something so complex that it touched all the senses it had evoked in him. This past year, with Tony Vaccaro’s story in the back of my mind, I was deployed to Afghanistan.

We have been at war in Afghanistan for over 17 years.

I don’t want to talk about why we are at war or whether it is something you support.

What I’d like to emphasize is that life has continued in Afghanistan. Like every contentious place in the world, life never stops. From what I experienced, it is especially true here.

In the northern city of Kunduz, there is a bustling downtown with entertainment stores and ice cream parlors, local radio personalities and Bollywood celebrities. The countryside is known as the breadbasket of Afghanistan, where melons, fruits, rice, and wheat are grown and distributed throughout the region. There was also a palpable sense of history there.

This is a difficult scene for me to convey because when I rode around, I was in that hulking vehicle in the photo. Unless something went terribly wrong, there were usually several tons of steel separating me from those goats… and that man. Even though the danger of the situation made it necessary, being separated from daily life in Afghanistan made it difficult to do my job. I can’t count the number of times I wished I could just walk around and explore the city.

Being a guest in another country, welcomed by some and unwelcomed by others, is a complicated and emotional sensation. Your fears are in the uncertainties and the unexpected, so you try to expect everything, but if you give in to that, it isn’t long before you fear everything. At some point, I realized that the same uncertainties that scared me scare the people in these small villages, and what’s more, they have been living with that sense for well over 50 years. It made it very difficult to convince anyone I was there to help if I reminded them of that fear and uncertainty.

The hard truth for some is that not everyone in a war zone is at war. Some of them just want you to acknowledge them when you pass, to pay the proper respects, to keep farming and producing so that they can provide for their family. Some of them are just going to work.

For my unit and my team, we tried our very best to fight our battles outside of where people lived. It can be trumped up to psychological operations and civil considerations but there was a human element to it. How am I supposed to be at war when there are all these people trying to live their lives like we aren’t even here? But sometimes war just is where it is.

I took this picture in a small village outside of Kunduz. It was the third and last day of a clearance operation where I had spent most of my days budgeting my time between coordinating the clearance and holding shuras with local leaders.

As the sun came up, we had already been at work for hours when a slow cloud emerged out of thin air from the village road, clanking with dull bells and the guttural yells of shepherds.

There was a moment of unease as nearly one hundred goats and their herders surrounded my vehicle. All of that fear welled up, but it subsided as the man in this picture saw me. No gun in hand, just my camera. He smiled, slightly uneasily, putting his right hand over his heart and slightly bowing. He was just going to work, and so was I.